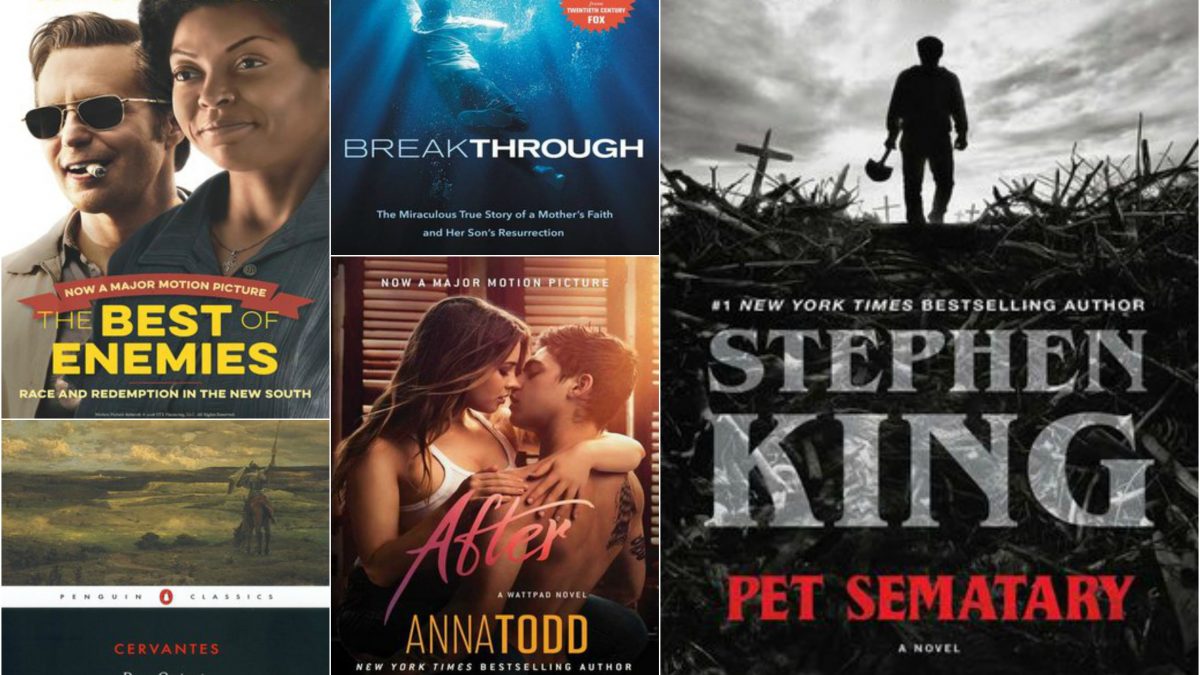 6 books to read before they hit theaters in April

Pet Sematary by Stephen King
When Dr. Louis Creed decides to move his family to the quaint, idyllic town of Ludlow, Maine, it seems like the perfect opportunity for a fresh start. But as the family settles in, they start to notice things in Ludlow seem a little off, starting with the odd little makeshift graveyard where generations of local children have buried their beloved pets…The new adaptation of King’s iconic tale will make you hesitant to give your cat a hug next time you see him. (In theaters April 5)

Best of Enemies by Osha Gray Davidson
Based on a true story, Best of Enemies is about the fight for desegregation in the South and documents the battle between a single mother from the poor black part of the town and a member of the Ku Klux Klan from the poor white part of town. As they go toe-to-toe against each other, they discover that both are victims of a power structure perpetuated in the South, and they have more in common than they thought. The film adaptation stars Sam Rockwell and Taraji P. Henson. (In theaters April 5)

Don Quixote by Miguel De Cervantes
The film The Man Who Killed Don Quixote starring Adam Driver and Jonathan Pryce, isn’t a true adaptation of Don Quixote but instead takes inspiration from the classic tale of romance and adventure. With the bonus of Terry Gilliam at the helm, it’s sure to be a zany look at a book known as one of the best literary works ever written. (Limited release, April 10)

After by Anna Todd
Teenage Tessa is the good girl back home, with a loyal boyfriend waiting for her. And then she goes to college and meets Hardin, the quintessential bad boy. That meeting changes everything, and soon Tessa views life as Before Hardin and After Hardin. (In theaters April 12)

The Impossible by Joyce Smith
Another true story, The Impossible explores the power of prayer and its impact on one family. When 14-year-old John fell through an icy Missouri lake, the family appeared to have lost everything, and a rescue mission soon turned into a recovery mission. For more than an hour, John was clinically dead. But his mom, Joyce, was not one to lose hope and turned to God for help. Miraculously, John’s heart started beating again, and he would defy every expert and every understanding of science. Breakthrough is the film adaptation of Joyce and her son’s extraordinary story. (In theaters April 17)

Game of Thrones by George R. R. Martin
This is actually a television show, but I would be remiss if I didn’t mention that the final season of HBO’s sweeping saga premieres this month. A mere six episodes stand between us and finding out who will sit on the Iron Throne. Of course, we don’t yet know when the next book in George R. R. Martin’s longstanding series will be out, but we have a list of readalikes to hold you over while you wait. (HBO, April 14)