Home > Library > Because when you read, nothing is impossible

Because when you read, nothing is impossible

By: Cristiam Usuga and Meredith Wemhoff.

In Colombia, the Fundación EPM, has enthusiastically promoted their digital collection since the beginning of their partnership with OverDrive in 2015.

They created an animated miniseries titled “Because when you read, nothing is impossible” featuring literary characters from beloved titles The Little Prince, Harry Potter, Tom Sawyer and Game of Thrones.

Patrons can pick up a pamphlet featuring one of these titles where they will find information on what their Reading Room has to offer. Included in the pamphlet are commemorative postcards and finger puppets that can be assembled and used to act out the drama that unfolds within the ebook. Fundación EPM leverages the use of QR codes to provide their users with streamlined access to their digital collection. Even the puppets have little QR codes on the top of their heads which lead patrons directly to the title. This campaign has engaged children and adults alike, with many patrons making a point to collect all of the literary characters.

Pictured here are library employees, Cristiam Usuga and Ruby Janeth, with members of the community. Fundación EPM promotes their digital collection at local culture and library events with their “Recharge Digital Books” display. New library users are enthusiastic to learn that in partnership with OverDrive, “it’s like having a library in your pocket.” 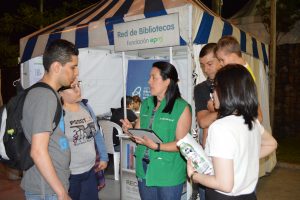 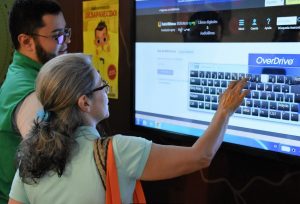