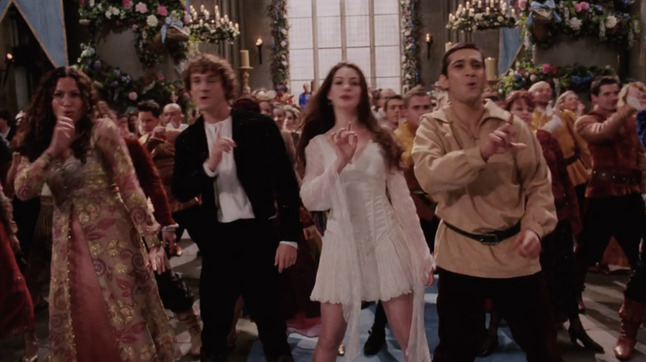 Book-to-Movie details that annoy us

NOTE: This post will be rife with spoilers so please proceed with caution.

9 movie details that irk (or enrage) us

First, I’ll share mine. I thought the Harry Potter series by J.K. Rowling was handled quite beautifully. My husband and I watch all 8 films each year around the holidays for peak warm and tingly feelings. But, how they treated the staircases really bothered me. In my mind, the staircases at Hogwarts disappeared, they didn’t simply move while you were on them. To be fair to the directors of the films, I’ve poured over Harry Potter wikis and fan pages and it would seem there is no real confirmation that they actually disappear so it’s a very personal irritation that may not even be a warranted one. However, the irritation continues.

Starship Troopers: They whitewashed all of the POC! Johnny’s full name was Juan Rico and he was from Buenos Aries! COME ON PEOPLE. ~ Liz Tousey, Manager, International Collection Development

I think they’ve fixed this one, but Tom Cruise was WAY too small to play Jack Reacher! ~ Cindy Orr, Digital Collection Advisor

SPOILER ALERT: Yes, Voldemort does die at the end of the movie. But in the totally wrong way! In the book he just fell down and died, the way a normal human would. That was the whole point of finding and destroying the horcruxes…so that he was just like a normal human and could be killed just like a normal human. It was poetic justice that the wizard Voldemort, who thought himself invincible, died in such a simple way. The whole dramatic disintegration death made him still something more than normal. ~ Melinda Helfer, Manager, Education Collection Development with another hot take on Harry Potter

And she wasn’t alone!

While there are a few things I missed in the Harry Potter movies (cutting Peeves and Dudley telling Harry “I don’t think you’re a waste of space,” for example), I hate the way Voldemort dies. In the books he falls down dead like any other human. Simple. Done. Dead. In the movies he slowly crumbles before exploding into ash, which makes him appear more magical and otherworldly. But he was no more magical and otherworldly than the wizarding world itself. He was nothing more than a man. A crazy, evil man – but a man none the less. ~ Andrea Sieracki, Product Support Specialist

What pops to the top of my brain is the movie remake of one of my favorites, Ella Enchanted. I haven’t watched the movie since the first time, it made me so angry, but I have read the book many, many times. The addition of another bad guy to the movie, who also has a snake as a sidekick for some reason, along with the nonstop karaoke, pops out early as the biggest change to this amazing book. However, after you watch it, you realize that they took all that was special about this strong, smart female lead, and made her into a traditional princess, who just also happens to be cursed. Shame for taking a kind-hearted, independent, linguist and turning her into a singing stereotype. ~ Meghan Volchko, Manager, Public Library Collection Development

Adam Sockel, Communication Specialist and Professional Booknerds Podcast host had quite a few:

Ready Player One – They changed basically the entirety of all three of the challenges the characters must accomplish. I get why they did it (for visuals and probably for copyright reasons) but it’s a structurally different story. I don’t hate the movie but it’s wildly different.

The Golden Compass – They managed to take a nuanced, layered story about religion, relationships and classism in society and turn it into a generic kids story with talking animals. Iorek Byrnison deserved better.

Alice’s Adventures in Wonderland (the Tim Burton one) – *Throws hands up in the air frustratingly*. “Hey what if we take the greatest story about nonsense and whimsy ever told and simply given Johnny Depp a bunch of funny hats and let him do his own makeup?” Thanks, Hollywood.

The House with the Clock in its Walls….this is classic children’s literature and it’s completely soured by poop jokes and a super creepy Jack Black head on the body of a baby. Naked, I might add. ~ Shannon Carroll, Product Support Specialist

And lastly, to end on a positive note, here is a book-to-movie adaptation that worked out for the better!