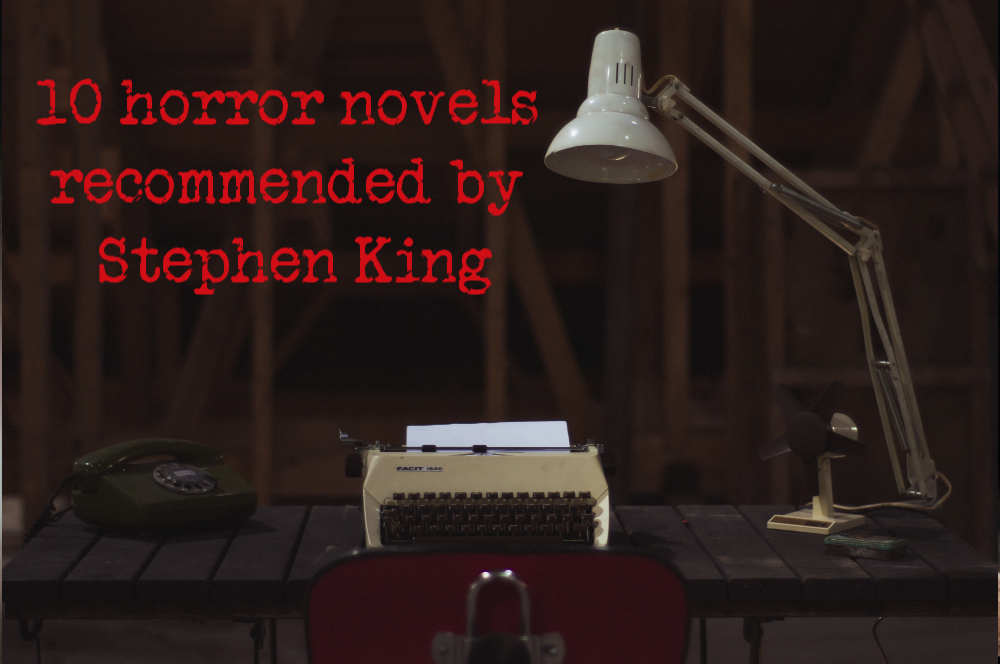 Readers all across the globe love Stephen King. Writers, too: over on the Professional Book Nerds podcast, Mr. King comes up more often than any other name as an influential author. It doesn’t matter who we’re interviewing or what genre they write. People love Stephen King.

That includes many of us on Team OverDrive. Whenever someone visits my cubicle for the first time, they often remark on the Stephen King Universe poster I have, which shows all of the ways Stephen King’s books, characters and locations are interconnected.

Horror books are published and read year-round, but there’s just something about reading a horror novel in October that adds a certain….something. And while Stephen King is often considered, well, the king of the genre, there are so many other horror authors and books out there that will scratch that scary itch.

What books have scared the guy whose novels scare all of us? Here is a list of 10 horror books that Stephen King himself has recommended:

Doing Harm by Kelly Parsons
Chief resident Steve Mitchell is the quintessential surgeon: ambitious, intelligent, confident. Charged with molding a group of medical trainees into doctors, and in line for a coveted job, Steve’s future is bright. But then a patient mysteriously dies, and it quickly becomes clear that a killer is on the loose in his hospital. A killer set on playing a deadly game with Steve. A killer holding information that could ruin his career and marriage. Now, alone and under a cloud of suspicion, Steve must discover a way to outsmart his opponent and save the killer’s next victim before the cycle repeats itself again and again.

According to Stephen King, this was the “best damn medical thriller I’ve read in 25 years.”

The Good Nurse: A True Story of Medicine, Madness, and Murder by Charles Graeber
After his December 2003 arrest, registered nurse Charlie Cullen was quickly dubbed “The Angel of Death” by the media. But Cullen was no mercy killer, nor was he a simple monster. He was a favorite son, husband, beloved father, best friend and celebrated caregiver. Implicated in the deaths of as many as 300 patients, he was also perhaps the most prolific serial killer in American history.

Yes, nonfiction, but Stephen King went so far as to compare this to one of his own characters: “You think Annie Wilkes [from Misery] was bad? Check out this chilling nonfiction account of Charlie Cullen, a friendly nurse who may have killed several hundred patients before he was caught. Now, there’s a real cockadoodie brat.”

Growing Things by Paul Tremblay
A masterful anthology featuring 19 pieces of short fiction including “The Teacher,” a Bram Stoker Award nominee for best short story in which a student is forced to watch a disturbing video that will haunt and torment her and her classmates’ lives and “Swim Wants to Know If It’s as Bad as Swim Thinks,” about a meth addict who kidnaps her daughter from her estranged mother as their town is terrorized by a giant monster…or not.

Stephen King called it “one of the best collections of the 21st century.”

Hex by Thomas Olde Heuvelt
Welcome to Black Spring, the seemingly picturesque Hudson Valley town haunted by the Black Rock Witch, a seventeenth century woman whose eyes and mouth are sewn shut. Muzzled, she walks the streets and enters homes at will. She stands next to children’s bed for nights on end. Everybody knows that her eyes may never be opened or the consequences will be too terrible to bear.

The elders of Black Spring have virtually quarantined the town by using high-tech surveillance to prevent their curse from spreading. Frustrated with being kept in lockdown, the town’s teenagers decide to break their strict regulations and go viral with the haunting. But, in so doing, they send the town spiraling into dark, medieval practices of the distant past.

The Hunger by Alma Katsu
Evil is invisible, and it is everywhere. That is the only way to explain the series of misfortunes that have plagued the wagon train known as the Donner Party. Depleted rations, bitter quarrels and the mysterious death of a little boy have driven the isolated travelers to the brink of madness. Though they dream of what awaits them in the West, long-buried secrets begin to emerge, and dissent among them escalates to the point of murder and chaos. They cannot seem to escape tragedy…or the feelings that someone — or something — is stalking them.

My Soul to Keep by Tananarive Due
When Jessica marries David, he is everything she wants in a family man: brilliant, attentive, ever-youthful. Yet she still feels something about him is just out of reach. Soon, as people close to Jessica begin to meet violent, mysterious deaths, David makes an unimaginable confession: More than 400 years ago, he and other members of an Ethiopian sect traded their humanity so they would never die, a secret he must protect at any cost. Now, his immortal brethren have decided David must return and leave his family in Miami. Instead, David vows to invoke a forbidden ritual to keep Jessica and his daughter with him forever.

Stephen King said it was “an eerie epic” and “bears favorable comparison to Interview with the Vampire. I loved this novel.”

Red Moon by Benjamin Percy
When government agents kick down Claire Forrester’s front door and murder her parents, Claire realizes just how different she is. Patrick Gamble was nothing special until the day he got on a plane and hours later stepped off it, the only passenger left alive, a hero. Chase Williams has sworn to protect the people of the United States from the menace in their midst, but he is becoming the very thing he has promised to destroy. So far, the threat has been controlled by laws and violence and drugs. But the night of the red moon is coming, when an unrecognizable world will emerge…and the battle for humanity will begin.

Stephen King described it as “a werewolf epic. Can’t stop thinking about it.”

Slade House by David Mitchell
Down the road from a working-class British pub, along the brick wall of a narrow alley, if the conditions are exactly right, you’ll find the entrance to Slade House. A stranger will greet you by name and invite you inside. At first, you won’t want to leave. Later, you’ll find that you can’t. Every nine years, the house’s residents — an odd brother and sister — extend a unique invitation to someone who’s different or lonely: a precocious teenager, a recently divorced policeman, a shy college student. But what really goes on inside Slade House? For those who find out, it’s already too late.

Stephen King said, “Hard to imagine a more finely wrought and chilling tale of the supernatural. One of the rare great ones.”

The Terror by Dan Simmons
The men on board the HMS Terror have every expectation of finding the Northwest Passage. But what they don’t expect is a monstrous predator lurking behind the Arctic ice. When the expedition’s leader, Sir John Franklin, meets a horrifying end, Captain Francis Crozier takes command, leading his surviving crewmen on a last desperate attempt to flee south across the ice.

But another winter is rapidly approaching, and with it, scurvy and starvation. Crozier and his men may find that there is no escaping the terror stalking them southward. And with the crushing cold and the fear of almost certain death at their backs, the most horrifying monster among them may be each other.

Stephen King called this “a brilliant, massive combination of history and supernatural horror.”

The Troop by Nick Cutter
Once every year, Scoutmaster Tim Riggs leads a troop of boys into the Canadian wilderness for a weekend camping trip — a tradition as comforting and reliable as a good ghost story around a roaring bonfire. But when an unexpected intruder stumbles upon their campsite — shockingly thin, disturbingly pale and voraciously hungry — Tim and the boys are exposed to something far more frightening than any tale of terror. The human carrier of a bioengineered nightmare. A horror that spreads faster than fear. A harrowing struggle for survival with no escape from the elements, the infected…or one another.

Stephen King said, “The Troop scared the hell out of me, and I couldn’t put it down. This is old-school horror at its best.”