Home > Promotional Ideas > “You Gotta Get the Card!”: How Stratford Public Library is promoting Libby and targeting new users 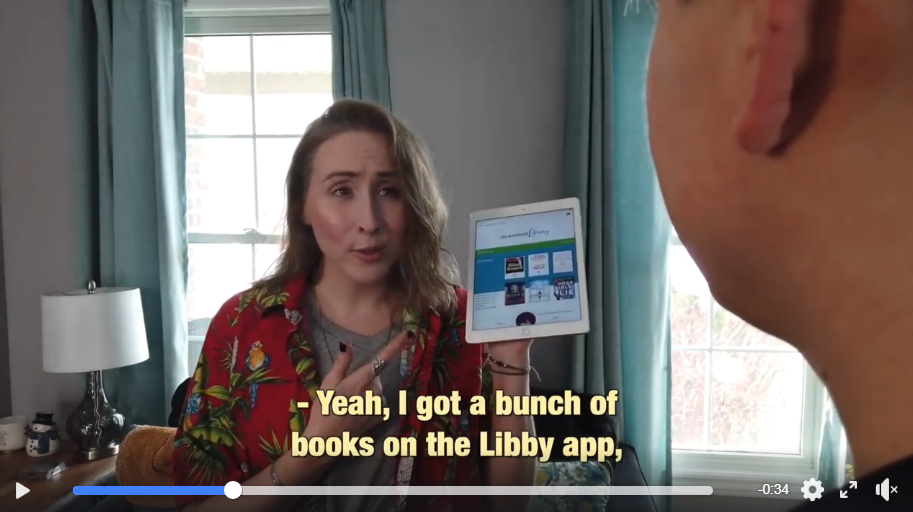 “You Gotta Get the Card!”: How Stratford Public Library is promoting Libby and targeting new users

How do you launch a marketing campaign to target new users? We talked to Krista Robinson from Stratford Public Library (member of the downloadLibrary consortium in Ontario), about the “You Gotta Get the Card” campaign and how it’s fighting a decline in library cardholders and reaching a new, younger demographic to raise awareness of library services.

Tell us about your position at the library.
I am the Systems Librarian for SPL (Stratford Public Library) and a local group of libraries called the Perth County Information Network. As part of my position, I also oversee all of the digital and print marketing for our library, a thriving MakerSpace, and the library building responsibilities. I supervise the MakerSpace and Marketing Librarian that spearheaded the project, as well as our co-op student that was responsible for all video editing.

Where did the idea for the “You Gotta Get the Card” campaign come from?
While our library has been experiencing a dramatic growth in traffic through the doors, our active card holders has been steadily declining and knew we had to do something to address this issue. In addition to declining cardholdership, we are struggling to attract younger demographics (15-35) to use library services and to attend programs. After investigating how and where we can best reach this demographic, we determined that they are hanging out online on social media platforms, specifically Instagram, and in person at the local cinema.

The MakerSpace and Marketing Librarian was at the local movie theatre and saw a hilarious commercial that residents at a local nursing home had created based on the “The Git Up Challenge.” This inspired the idea to create these promotional videos to air online and at the theatres.

Did you handle writing, acting, filming, and production all in house or did you work with any outside resources?
The one thing we knew is that we wanted the videos to be shareworthy – so humour was a must. There is a local YouTuber / comedian / musician named Stewart Reynolds (aka Brittlestar) who has been filming short clips for area groups and we reached out to him for assistance. We brainstormed ideas, and came up with three ideas which we felt would be interesting to a younger demographic (15 – 35). Stewart wrote the scripts for us and did the filming. In the end, our co-op student did the editing with final tweaks from Stewart. The actors were all our “rock star” staff – something that was important for us to do.

The 3 videos in this campaign highlight your Wi-Fi hotspots, MakerSpace and creative classes, and Libby. How did you decide what to feature in the videos?
These topics we felt would be of interest to a younger demographic and are services the library provides that not everyone is aware of.

Do you plan to make any other videos in this series?
YES! We are planning on three more videos this Fall.

The “Gotta Get the Card” videos are showing as trailers before movies at your local cinema. How did your partnership with local movie theatres start?
Since the “Gotta Get the Card” campaign was sparked by seeing another local business successfully running promotional trailers at the theatre, it was a natural first step to begin screening the trailers at the Stratford Cinema and the Queen of the Square Cinema.

Other than the movie theaters and social media, are the videos being shared anywhere else?
We have the videos being shown in the library on our digital screens, as well as the local high school and a downtown pub. We are currently in communications with other local businesses to determine future advertising opportunities.

What was the financial investment in your video series?
It was minimal, just $1500 CDN for production and we paid $700 to the movie theatres for ad space this winter and spring.

Have you seen any results so far from the campaign?
The pick up on social media has been impressive. Our MakerSpace video reached 2,500 people. The Libby app video reached almost 4,000 views and our hotspot video reached 6,200. We have people coming in saying the “Gotta Get the Card” not realizing the already have it with their library card! We have had a number of new cards holders come in as well, specifically stating that the videos inspired their visit.

If another library wanted to do a similar campaign, what tips would you share?

Thank you to Krista for sharing these helpful insights about launching a new marketing campaign!

How are you promoting Libby at your library? Let us know! Need help getting started? Talk to your OverDrive team about how we can help you get the word out to your community.