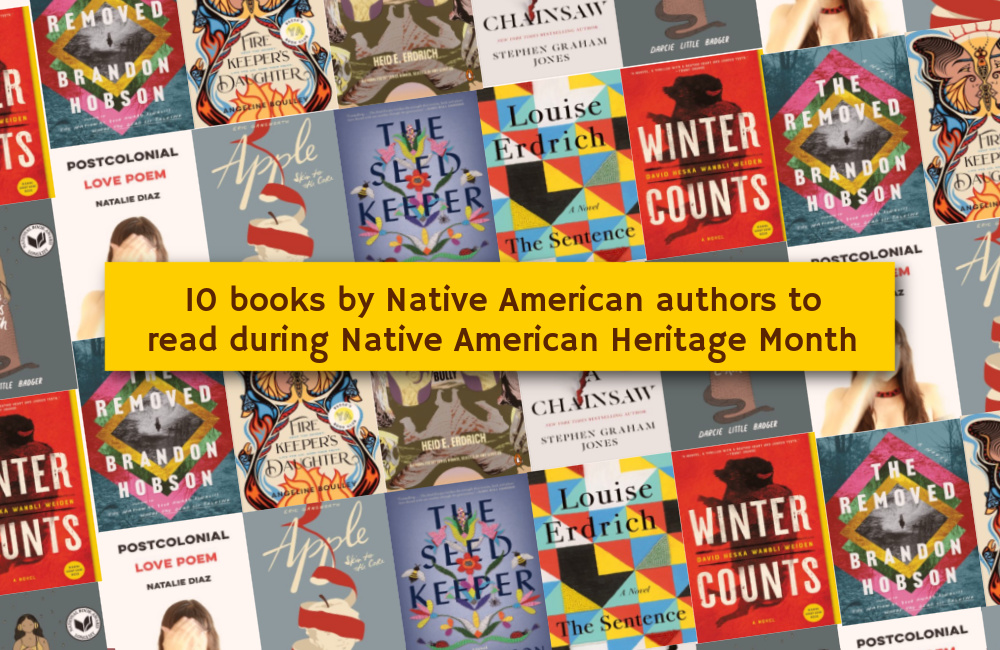 November is National Native American Heritage Month. Not only is it a time to recognize the enormous contributions Native Americans have made to our world, it is also a time to reckon with the atrocities and injustices Native nations have suffered over the centuries.

Among the many contributions the first Americans have made to our country is through the arts, including novels and poetry. In honor of National Native American Heritage Month, here are 10 books by Native Authors to immediately add to your TBR.

My Heart is a Chainsaw by Stephen Graham Jones
On the surface, My Heart is a Chainsaw is a story of murder in small-town America. But beneath its beating heart is a biting critique of American colonialism, Indigenous displacement, gentrification, and a heartbreaking portrait of a broken young girl who uses horror movies to cope with the horror of her own life.

The Sentence by Louise Erdrich
In her latest novel, Erdrich asks what we owe to the living, the dead, to the reader, and to the book. The Sentence is set in a small independent bookstore (owned in real-life by Erdrich herself) that is haunted by its most annoying customer who died in the store. Taking place from Nov. 2019 to Nov. 2020, Erdrich’s book examines all that occurs in Minnealpolis during a year of grief, astonishment, isolation, and furious reckoning.

Little Big Bully by Heid E. Erdrich
Sister of Louise Erdrich, poet Heid is a renowed Native poet. Her latest book Little Big Bully begins with a question asked of a collection and troubled we: how did we come to this? The collection of poems is a response, offering personal myth, American and Native American contexts, and allegories driven by women’s resistence to narcassits, stalkers, and harrasers. The poems are personal and immediate, cultural and political.

Firekeeper’s Daughter by Angeline Boulley
Selected as a Reese Witherspoon x Hello Sunshine Book Club pick, Firekeeper’s Daughter is a groundbreaking young adult thriller about a Native teen who must root out the corruption in her community. This stunning debut was an instant New York Times bestseller and was named a TIME magazine Best of YA All Time Selection.

The Removed by Brandon Hobson
Steeped in Cherokee myths and history, The Removed is a novel about a fractured family reckoning with the tragic death of their son long ago. National Book Award finalist Hobson seamlessly blends the real and spiritual to excavate the deep reverberations of trauma—a meditation on family, grief, home, and the power of stories on both a personal and ancestral level.

The Seed Keeper by Diane Wilson
A haunting novel spanning several generations, The Seed Keeper follows a Dakhóta family’s struggle to preserve their way of life, and their sacrifices to protect what matters most. Weaving together the voices of four indelible women, Wilson tells a beautiful story of reawakening, of remembering our original relationship to the seeds and, through them, to our ancestors.

A Snake Falls to Earth by Darcie Little Badger
In A Snake Falls to Earth, Darcie Little Badger draws on traditional Lipan Apache storytelling structure to weave an unforgettable tale of monsters, magic, and family. Nina is a Lipan girl in our world. Oli is a cottonmouth kid, from the land of spirits and monsters. Nina and Oli have no idea the other exists. But a catastrophic event on Earth, and a strange sickness that befalls Oli’s best friend, will drive their worlds together in ways they haven’t been in centuries.

Apple (Skin to the Core) by Eric Gansworth
The term “apple” is a slur in Native communities, indicating someone “red on the outside, white on the inside.” In Apple (Skin to the Core), author Gansworth tell his story, the story of his family, and the story of Native folks everywhere. From the horrible legacy of the government boarding schools, to a boy watching his siblings leave and return and leave again, to a young man fighting to be an artist who balances multiple worlds. He shatters that slur and reclaims it in verse and prose and imagery that truly lives up to the word heartbreaking.

Postcolonial Love Poem by Natalie Diaz
Winner of the 2021 Pulitzer Prize in Poetry, Postcolonial Love Poem is an anthem of desire against erasure. In her second poetry collection, Deiz writes of language and land, enemies and lovers, through it all demanding that each be held as beloved. Through her poems, the wounds inflicted by America onto an indigenous people are allowed to bloom pleasure and tenderness.

Winter Counts by David Heska Wanbli Weiden
A groundbreaking thriller about a vigilante on a Native American reservation who embarks on a dangerous mission to track down the source of a heroin influx. Winter Counts is a tour-de-force of crime fiction, a bracingly honest look at a long-ignored part of American life, and a twisting, turning story that’s as deeply rendered as it is thrilling.