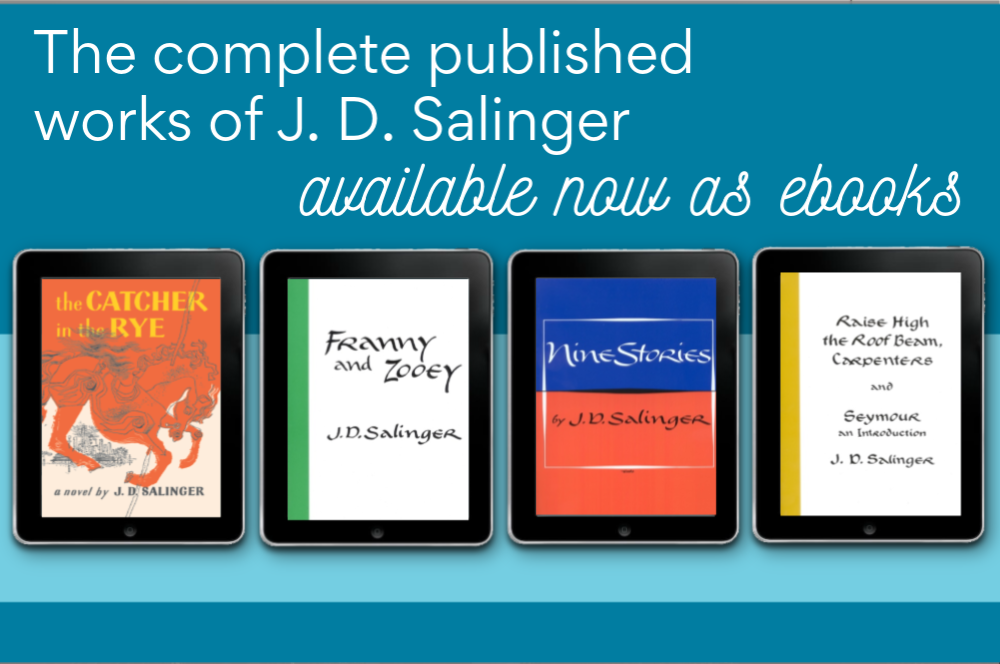 When it comes to cultural impact, very few authors can compete with the lasting legacy of J. D. Salinger. His novel The Catcher in the Rye has graced high school English classes for decades, and readers have fallen in love with the short stories and novellas found in Franny and Zooey, Nine Stories, and Raise High the Roof Beam, Carpenters and Seymour—An Introduction.

Now, for the first time, the complete published works of Salinger are available as ebooks! We have all four available for purchase in Marketplace, so don’t miss on your opportunity to add these classic books to your OverDrive collection.

To celebrate the release, our publishing partners at Hachette are giving 250 public libraries in the U.S. a complete ebook set of all four titles. To be automatically entered, all you have to do is place an order in Marketplace between now and Sept. 6. We will draw 10 random winners each day during the sweepstakes period. See official rules for more information.

Here are the four titles included in the ebook set:

The Catcher in the Rye

The “brilliant, funny, meaningful novel” (The New Yorker) that established Salinger as a leading voice in American literature — and that has instilled in millions of readers around the world a lifelong love of books.

The hero-narrator of The Catcher in the Rye is an ancient child of 16, a native New Yorker named Holden Caufield. Through circumstances that tend to preclude adult, secondhand description, he leaves his prep school in Pennsylvania and goes underground in New York City for three days.

The “original, first-rate, serious, and beautiful” short fiction (New York Times Book Review) that introduced Salinger to American readers in the years after World War II, including “A Perfect Day for Bananafish” and the first appearance of Salinger’s fictional Glass family.

Nine exceptional stories from one of the great literary voices of the twentieth century. Witty, urbane, and frequently affecting, Nine Stories sits alongside Salinger’s very best work — a treasure that will passed down for many generations to come.

“Perhaps the best book by the foremost stylist of his generation,” (New York Times) Salinger’s Franny and Zooey collects two works of fiction about the Glass family originally published in The New Yorker.

A novel in two halves, Franny and Zooey brilliantly captures the emotional strains and traumas of entering adulthood. It is a gleaming example of the wit, precision, and poignancy that have made Salinger one of America’s most beloved writers.

The last book-length work of fiction by Salinger published in his lifetime collects two novellas about “one of the liveliest, funniest, most fully realized families in all fiction.” (New York Times)

These two novellas, set 17 years apart, are both concerned with Seymour Glass, the eldest son of Salinger’s fictional Glass family, as recalled by his closest brother, Buddy.

Be sure to head over to Marketplace today to purchase your copies of The Catcher in the Rye, Franny and Zooey, Nine Stories, and Raise High the Roof Beam, Carpenters and Seymour—An Introduction. You might even get lucky and win an extra set of the four titles!