Home > Library > 8 YA books by trans and nonbinary authors 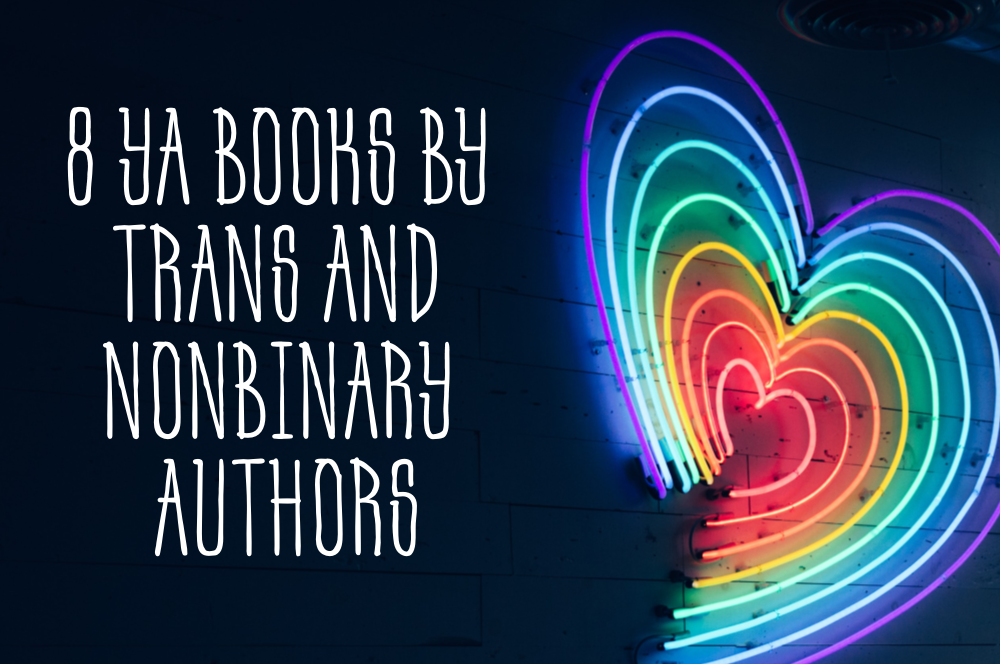 8 YA books by trans and nonbinary authors

June is Pride Month, and while it’s important to read books by LGBTQIA+ authors all year long, Pride Month is a time to truly celebrate the works of LGBTQIA+ artists, authors, and activists. This is especially important for kids and teens, who should be able to see themselves in the books they read.

Here are eight books by transgender and nonbinary authors for young adult readers:

Pet by Akwaeke Emezi
There are no monsters anymore, or so the children in the city of Lucille are taught. Jam and her best friend, Redemption, have grown up with this lesson all their life. But when Jam meets Pet, a creature made of horns and colors and claws, who emerges from one of her mother’s paintings and a drop of Jam’s blood, she must reconsider what she’s been told. Pet has come to hunt a monster, and the shadow of something grim lurks in Redemption’s house. Jam must fight not only to protect her best friend, but also to uncover the truth and the answer to the question—How do you save the world from monsters if no one will admit they exist?

Cemetery Boys by Aiden Thomas
When his traditional Latinx family has problems accepting his true gender, Yadriel becomes determined to prove himself a real brujo. With the help of his cousin and best friend Maritza, he performs the ritual himself, and then sets out to find the ghost of his murdered cousin and set it free.

However, the ghost he summons is actually Julian Diaz, the school’s resident bad boy, and Julian is not about to go quietly into death. He’s determined to find out what happened and tie off some loose ends before he leaves. Left with no choice, Yadriel agrees to help Julian, so that they can both get what they want. But the longer Yadriel spends with Julian, the less he wants to let him leave.

There’s a long-running joke that, after “coming out,” a lesbian, gay guy, bisexual, or trans person should receive a membership card and instruction manual. THIS IS THAT INSTRUCTION MANUAL. You’re welcome.

Inside you’ll find the answers to all the questions you ever wanted to ask: from sex to politics, hooking up to stereotypes, coming out and more. This candid, funny, and uncensored exploration of sexuality and what it’s like to grow up LGBT also includes real stories from people across the gender and sexual spectrums, not to mention hilarious illustrations.
You will be entertained. You will be informed. But most importantly, you will know that however you identify (or don’t) and whomever you love, you are exceptional. You matter. And so does this book.

Home and Away by Candice Montgomery
Tasia Quirk is young, Black, and fabulous. She’s a senior, she’s got great friends, and a supportive and wealthy family. She even plays football as the only girl on her private high school’s team.

But when she catches her mamma trying to stuff a mysterious box in the closet, her identity is suddenly called into question. Now Tasia’s determined to unravel the lies that have overtaken her life. Along the way, she discovers what family and forgiveness really mean, and that her answers don’t come without a fee. An artsy bisexual boy from the Valley could help her find them—but only if she stops fighting who she is, beyond the color of her skin.

Dreadnought by April Daniels
Danny Tozer has a problem: she just inherited the powers of Dreadnought, the world’s greatest superhero. Until Dreadnought fell out of the sky and died right in front of her, Danny was trying to keep people from finding out she’s transgender. But before he expired, Dreadnought passed his mantle to her, and those secondhand superpowers transformed Danny’s body into what she’s always thought it should be. Now there’s no hiding that she’s a girl.

It should be the happiest time of her life, but Danny’s first weeks finally living in a body that fits her are more difficult and complicated than she could have imagined. Between her father’s dangerous obsession with “curing” her girlhood, her best friend suddenly acting like he’s entitled to date her, and her fellow superheroes arguing over her place in their ranks, Danny feels like she’s in over her head.

She doesn’t have time to adjust. Dreadnought’s murderer—a cyborg named Utopia—still haunts the streets of New Port City, threatening destruction. If Danny can’t sort through the confusion of coming out, master her powers, and stop Utopia in time, humanity faces extinction.

I Wish You All the Best by Mason Deavers
When Ben De Backer comes out to their parents as nonbinary, they’re thrown out of their house and forced to move in with their estranged older sister, Hannah, and her husband, Thomas, whom Ben has never even met. Struggling with an anxiety disorder compounded by their parents’ rejection, they come out only to Hannah, Thomas, and their therapist and try to keep a low profile in a new school.

But Ben’s attempts to survive the last half of senior year unnoticed are thwarted when Nathan Allan, a funny and charismatic student, decides to take Ben under his wing. As Ben and Nathan’s friendship grows, their feelings for each other begin to change, and what started as a disastrous turn of events looks like it might just be a chance to start a happier new life.

Stay Gold by Tobly McSmith
Pony just wants to fly under the radar during senior year. Tired from all the attention he got at his old school after coming out as transgender, he’s looking for a fresh start at Hillcrest High. But it’s hard to live your best life when the threat of exposure lurks down every hallway and in every bathroom.

Georgia is beginning to think there’s more to life than cheerleading. She plans on keeping a low profile until graduation…which is why she promised herself that dating was officially a no-go this year.
Then, on the very first day of school, the new guy and the cheerleader lock eyes. How is Pony supposed to stay stealth when he wants to get close to a girl like Georgia? How is Georgia supposed to keep her promise when sparks start flying with a boy like Pony?

Felix Ever After by Kacen Callender
Felix Love has never been in love—and, yes, he’s painfully aware of the irony. He desperately wants to know what it’s like and why it seems so easy for everyone but him to find someone. What’s worse is that, even though he is proud of his identity, Felix also secretly fears that he’s one marginalization too many—Black, queer, and transgender—to ever get his own happily-ever-after.

When an anonymous student begins sending him transphobic messages—after publicly posting Felix’s deadname alongside images of him before he transitioned—Felix comes up with a plan for revenge. What he didn’t count on: his catfish scenario landing him in a quasi–love triangle.

But as he navigates his complicated feelings, Felix begins a journey of questioning and self-discovery that helps redefine his most important relationship: how he feels about himself.